October 19 ~ Venus trine Jupiter at 19º Virgo/Capricorn. Venus sextile or trine Jupiter is generally a lucky, gregarious and loving aspect. It is wonderful for a career in the arts but it also (as seen in my research) seems to favour working within the fields of philosophy and spirituality. What surprised me about the marriage between these two pleasure-loving benefics is the number of powerful conquerors born with this aspect too. I imagine the native would need some Martian aspects to kick this lounge lizard off its sumptuous sofa, however. This aspect gives such great charm and sheer good luck to the subject, that success often finds them and not the other way around.

“Hollywood is a place where they’ll pay you a thousand dollars for a kiss and fifty cents for your soul.” ~ Marilyn Monroe A fascination with stardom or the stars above seems to be strong with Venus sextile or trine Jupiter. It also gives a certain star quality to a Davison/combined chart. Nevertheless, I have also found some very co-dependent and even abusive relationships had this aspect amongst my friends and clients.

Maybe it is just too easy for one of the partners to serve as a handler to the other, keeping them sweet with drugs or money. This is an aspect of romance and indulgence, the ultimate rom-com. It is flamboyant but also incredibly stylish so great for high-end fashion designers.

Those born with Venus sextile or trine Jupiter are optimists, usually very generous and loving with a fantastic sense of humour. Hence they will always be on the ‘A’ list of everyone’s party invites. But lock up your spouse as these folk are incorrigible seducers. But they get away with their ‘Jack the lad’ behaviour because they are such roaring fun.

Venus sextile or trine Jupiter are usually quite lucky with money too, people love to throw cash at them because their company is worth the price. Naturally, these folk will be very popular and always be in demand. Therefore glitzy Venus/Jupiter can command high fees, just for benefit of their scintillating presence.

“If you want to know what God thinks of money, just look at the people he gave it to.”
~ Dorothy Parker

The negative side of this aspect is often complete hedonism and a tendency to gamble fecklessly. Venus sextile or trine Jupiter attracts money as easily as they can lose it. However if they happen to fall on hard times, its never for very long, and they soon find a way to attract a new benefactor. It seems rather unfair that these folk easily bounce back even after some phenomenally bad life choices. Do they ever learn from their mistakes? However, resentment doesn’t ever build because these folk know how to share their success too. Venus/Jupiter can sometimes be grandiose and elitist, infuriatingly perhaps, you can’t help loving these warm-hearted, good-time guys and gals. 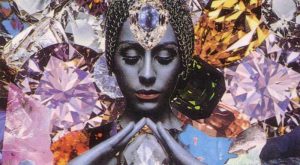