Scorpio Decan 3 is ruled by Venus and the Moon (Cancer triplicity). The Sun creeps through the constellations of the Fly, Serpent, Wolf, Chameleon, and Centaur from November 12 to 22. This decan contains all the items you would find in the musty forbidden forest. Every scary story has one. Here we have howling wolves, magic mushrooms, mythical centaurs, psychedelic chameleons and slithering serpents… What a trip!

Of course, tropical Scorpio is famous for magic and mystery, but Scorpio decan 3 does not deliberately set out to be sneaky or secretive despite the accusations. They are just naturally creatures of the night and are accustomed to creeping about so as not to disturb anyone.

These considerate fellows just like to blend in and make as little fuss as possible. Scorpio decan 3 is very close to nature and like the natural world, it does not have much of an ego. Blending in and harmonizing is actually the best way to survive.

Do we see a row of sunflowers trying to outdo each other by growing the biggest heads, certainly not. In fact, drawing attention to yourself may actually get you eaten. This is how Scorpio decan 3 observes the human jungle, watching and living by instinct. They look and learn rather than read books.

Scorpio decan 3 are pack animals, so everything they do is motivated to protect the future of their breed. They make devoted parents and proud tribe leaders. Nature is not all pretty flowers and can be savage. A herd may have to sacrifice one of its weakest in order to appease a predator.

While the lion is busy chomping away at a gazelle, the rest of them can drink at the waterhole peacefully. Sometimes, of course, there will be some literal human sacrifice from some individuals who see themselves as doing something good for the tribe as a whole, for example, Hermann Goering (Ascendant 27º Scorpio).

But it is chilling that Madeleine’s McCann’s abduction and toddler James Bulger (kidnapped by two young boys and murdered) is found here. There is also notorious Myra Hindley (Moon 23º Scorpio) and a few more other killers. Patience is their absolute forte. They can get through the toughest endurance tests known to man.

Try to torture them and they will be the last ones ones on the rack, with no fingernails left. Their resolve is awesome to behold. And don’t even bother trying to win a staring contest, your eyeballs are melting while theirs seem ceramic. Stubborn, immovable yes, they are a fixed sign.

Since this decan is ruled by passionate Venus and the emotional Moon, there is the little matter of sex, obsession and jealousy to discuss. Scorpio decan 3 is probably the worse person you can betray.

You will never hear the end of it. Unfortunately this loyalty they expect does not work both ways. They can very easily have the odd sexual indiscretion and you will never, ever know about it. They are superb at covering their tracks.

Sometimes they kid themselves that they actually didn’t do anything unfaithful at all since being drunk, seduced, ‘on a break’ or not having full sex absolves them in some way. Yes, they believe it, so it must be true.

If you do manage to uncover a faux-pas, Scorpio decan 3 can easily hypnotise you into disregarding the evidence you see with your own eyes, if they put their mind to it. You will really want to believe them too, because a sexy Venus ruled Scorpio is simply very hard to stay angry with…

Another skill of Scorpio decan 3 is their knack for recycling. They will keep hold of the most unlikely items because they think one day they will come in useful. Often, years later they actually do. They tend to have very large sheds, usually full of old paint tins and left over tiles. This is the Scorpio decan of resurrection, so they are the ones in your street most likely to keep a stock of tinned food for the end of the world. Scorpio decan 3 will be the last men standing.

The tarot card associated with Scorpio decan 3 is the seven of cups. Both Venus and the Moon as rulers are reflective and passive planets. This resonates well with the cards divinatory meanings which are;

“As he stands mesmerized in front of the Seven Cups, he realizes he has much to contemplate and reflect on…. You could be attending counseling or psychotherapy sessions to help expose hidden motives and overcome childhood conditioning to expose your true personality.  Then again, you may be using meditation or reading Self-Help books in an attempt to find your True Self.” ~ teachmetarot.com 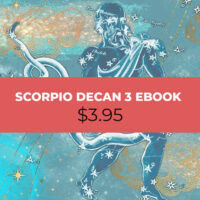 Alpha Musca 20º is a housefly. Musca is related to Muscarine found in deadly mushrooms. It is a trace element in the Fly Agaric (Amanita Muscaria). Muscarine is also found in decaying animal tissue. Flies hover around the dead carcass of sacrifices and food left out to for the gods.  “Beelzebub…the word is translated as ‘man of flies,’ for a fly is called zebub.” [1].

Unukalhai 22º ~  “Many quarrels and disappointments, unfortunate life, seriously affected by death of family or friends.” [3a]
Agena 24º ~ “Mental activity, rashness, success, many friendships.” [3b] “To have the common touch; to be in step with the masses. To be raised in a working class world and feel proud of it, and, or to have the skills in dealing with the public in any profession. Matters to do with a popular person.” [5a]
Toliman 29º ~ “Envious, self-centred, slow but fairly successful progress, many enemies, loss of inheritance.” [3c] “To expand the world of others. To be a teacher or the perpetual student. A time when the voice of the people is forcibly expressed” [5b]

The Sun has no dignity here and the star interpretations can make this position difficult also. Brady does come out with the teaching aspect, which is probably as a result of traumatic life experiences. Coppock maintains “ Though often magnetic, those born with the Sun here struggle with themselves, for their desires if unchecked, will lead them astray.” [6] Excesses and addictions are some of the key words for the 7 of cups card.

There are many tempting offers that the native might find it hard to refuse, so often the ‘forbidden fruit’ is literally offered to these natives on a plate. But ofcourse they are masters of seduction themselves. You might find these people slink up to you on the dance floor, lock eyes and give you the old snake charmers act. They tend to be rather good dancers too, understated and slinky. Sun Scorpio 3 are not the sort who will do frantic Travolta moves with much hand-waving, but will be the one hypnotically gyrating their hips in the corner, arms down.

Not everyone will notice them, only you, because it is you that they are working their magic on. This is how Sun Scorpio 3 operates in life. They blend in generally and don’t waste energy in trying to make every one like them. They make a few choice decisions in their life and work silently towards them until the mission is accomplished. Their plans are secret because they won’t risk anyone nabbing their prize before they get there. They also take quite a long time getting to their goal because they are planning the most risk-free strategy for getting there. Survival see. Their strategic moves and stealth action is also useful in sports or the military too.

*This birth time is rated DD (Dirty Data) yet it the one many astrologers went with when predicting the 2016 election.
** Questionable. Time source: http://astro-charts.com/persons/chart/bernie-sanders/. It is interesting these two running mates are speculated as having the same Ascendant all the same.