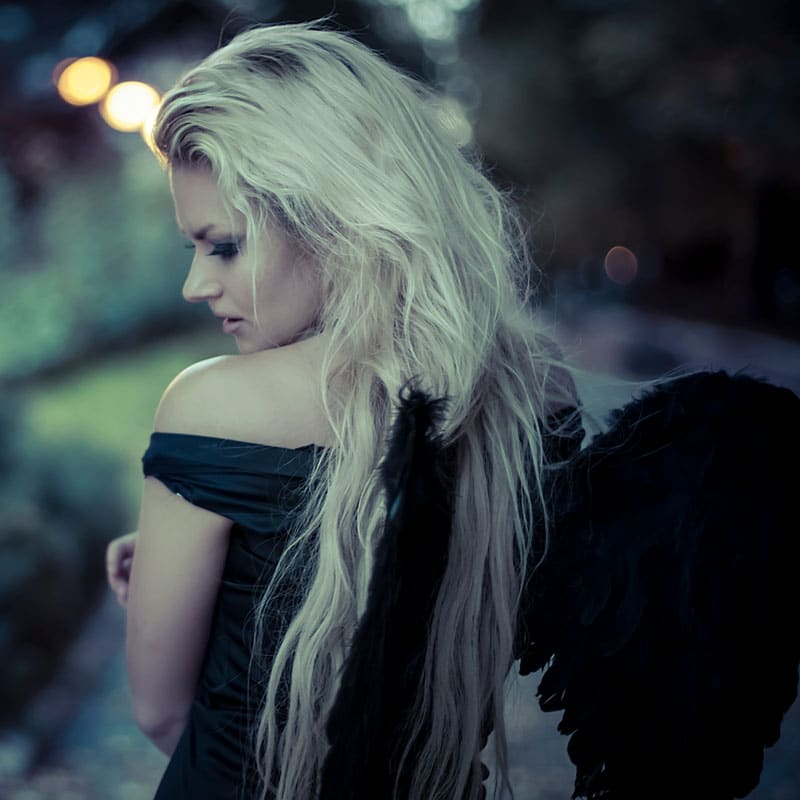 Sun sextile Lilith or Sun trine Lilith native’s life within a rich fantasy life and view the world as magical. The creative fire of the Sun smoulders under a hyper-sensitive, psychic antenna which is tuned into the collectives angels and demons. They are gifted at flipping from dark to light and back again, taking us on a journey which helps purge our fears and then sprinkle fairy dust on our dreams. Sometimes this is done by altered states of consciousness for the soft, harmonious aspects bring out the shamanic/magician aspect of Lilith.

Sun sextile Lilith natives are romantics, but at the same time, circumstances tend to draw them into the pit of the underworld. In this dark place, they become disillusioned when their fairy tales become nightmares. Success slaying their personal dragons drives them to great artistic achievement. This is cathartic and healing for themselves and their audience.

Sun trine Lilith is the perfect aspect for an actor or politician. Success comes easily to these people as they shine out powerful, magnetic energy which sucks in and mesmerises en mass. Sun trine Lilith or sextile Lilith will usually stand out from traditional society in some way by being outsiders or for having to make unpopular decisions in their life. But although they may exhibit quite eccentric behavior they are still able to make quite gruesome things palatable and acceptable to the masses.

Sun Lilith soft aspects exude all manipulative charm and charisma of the Black Moon. Success comes easily to these people as they shine out magnetic energy, which sucks in and mesmerises. They usually stand out from traditional society in some way by being outsiders or making unpopular decisions in their life.

Although they may exhibit quite eccentric behaviour they still seem to be able to bewitch the public with their magical aura, gifted as they are at making quite gruesome things palatable and acceptable. They are quite skilled at acting, wearing masks and putting on the “glamour”, because of this they make convincing orators, salesmen and gripping storytellers.

Sun sextile Lilith or Sun trine Lilith are skilled at bending the truth, because of this they make convincing orators, salesmen and gripping storytellers. The trine can be quite zealous with Lilith since it’s a Jupiterian type of aspect. The natives can work like irresistible whirlpools of energy who pull unsuspecting people into their crusade.

Helena Blavatsky is credited with being one of the founders of the ‘new age’ movement. She co-founded the Theosophical society in 1875. Blavatsky was born of an aristocratic family and became interested in magic and esoteric subjects in her teens.

With her parents she travelled the length and breadth of the Russian empire which probably accounted for Blavatsky’s later nomadic lifestyle. Blavatsky claims she received spiritual teachings while on extensive world travels but these claims are hard to verify since so much of her early writings have been lost.

Blavatsky is a fine example of Sun trine Lilith as she is a controversial figure to this day. She has all the witchy mediumship abilities and mysteriousness of the black moon. However Blavatsky is also seen as a cult leader and considered a charlatan by some. If Blavatsky really did travel the world as a solo female that would’ve been seen as very progressive and feminist at the time. However as an aristocrat I’m sure Blavatsky probably was serviced by a huge entourage, the trine giving her protection and privilege on her travels.

Dark author Stephen King described himself as a nerd as a teen and penned the high school newspaper “The Village Vomit”. Nevertheless, he turned his gift of writing into something far more popular, profitable and palatable. King eventually became outstanding in his field of horror writing.

The sorcerous side of Lilith is demonstrated by Hermann Goering, Hitler’s charismatic and brilliant sidekick. He was known for his fantastical, extravagant lifestyle and flamboyant attire. He loved the drama of the opera, its fantasy world a sharp contrast to the grisly war crimes for which he was in part responsible. While exiled in Austria he suffered such intense pain with pneumonia that he eventually became a violent morphine addict. He was said to be hysterical and unreliable in character.

Horse whispering actor and director Robert Redford started his dream by sketching to relieve the boredom of his mundane life. Although a Hollywood success he is disgusted by all it stands for saying “The dollar drives it, not art.” As an environmental activist, Redford has transmuted the very Lilithian pain suffered at the loss of his first child to SIDS. He now prefers to live in the mountains, away from the glitz.

*All examples are 2º and under using True Lilith only.