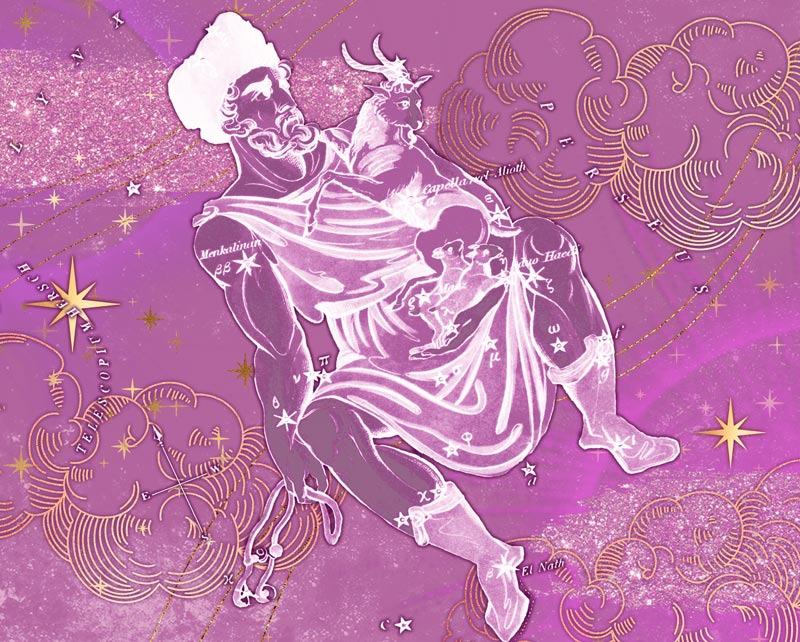 Gemini decan 3 is ruled by the Sun and Saturn (Aquarius Triplicity) which happen to be the two most authoritarian gods of the solar system. The high and mighty Sun is a fitting co-ruler for this section of the ecliptic. The solar king shines through the Hunter, Dove, Bull’s Horns and the Charioteer from June 12 to 20. Gemini decan 3 is absolutely jam-packed with bright and fortunate stars.

It contains one arm of the Milky Way and is home to the Great Orion Nebula. This super-rich realm is known as the star nursery. This is a multi-talented, multi-tasking, multi-faceted super-parent who wants it all and does it all. Like tropical Gemini, this decan has two sides to it and each one is just as forceful and strong as the other. On the one hand, we have the peaceful dove and the nursing goat.

This hand is the life-giver, a birthplace of stars, the ever-nourishing Milky Way that flows from the breast of Nut the sky goddess. On the other hand, we have the hunter, the destroyer of life, the mighty warrior, the potent phallus. This decan can signify the battle of the sexes or more positively, the sacred marriage between the god and the goddess, Heros Gamos….

Some native Indian tribes maintain that souls enter into existence through the area between constellations Taurus and Gemini. Gemini decan 3 is the section of the ecliptic which falls between the horns of the Bull and the foot of Castor the mortal twin. This area aligns perfectly (In longitude) with the Great Orion Nebula, which is positioned near the tip of the Hunters phallic belt sword.

These stars are like little starry sperm. Orion’s Nebula is probably the most photographed object in the sky, under high strength telescopes. Orion ‘s belt has fascinated us for thousands of years even before it’s full telescopic beauty was completely revealed to us. It has even been suggested that this nebula underlies Michelangelo’s Creation on the ceiling of the Vatican’s Sistine Chapel.

This decan has a fascination with conspiracy and elite power structures. These folk can be extremely successful within the government, big business, the military or religion. But here lies the paradox. Gemini decan 3 can be working in the heart of these institutions or they will be the ones working to bring the most corrupt ones down.

There is no in between for these people. It’s all very black and white. You are either best friend or enemy, good or evil, sinner or saint. Gemini decan 3’s are not your typical, bridge-building twins, but they are about duality. They sometimes like to play devil’s advocate but are not chameleons or shape-shifting tricksters. You damn well know who these people are.

Even the peaceniks among them are bold and confrontational in their campaigning. They present their ideas in a swash-bucking manner and with much theatre. Fame, wealth and success seem to be the theme with planets placed in Gemini decan 3, though there is always turbulence and the chance of ruin.

The calamitous tendencies are perhaps due to the sheer force of the stars of Orion. A weird theme that keeps coming up with the stars in this sector is that according to Vivian Robson, females are seen as “shrews”?! A medieval term for a stubborn and troublesome woman! These days they might manifest as 3 wave feminists or social justice warriors.

Another trait that comes up is envy from others. Possibly these super-gods can rub people up the wrong way with their arrogance. Gemini decan 3 can easily suffer from hubris. They have a great interest in theology and myths, but in the end, the only higher authority they ever listen to is themselves.

The problem with this high-status zone is believing they themselves are God. Well, you can’t blame them really, with all those lucky, high-voltage stars!

Gemini decan 3 are the zodiacs over-achievers, they want to learn everything, seven different languages if they have to. They are greedy for knowledge and masters of commerce. Instinctively they know how to wheel ‘n deal to the very top of their profession. Creativity is high, there are some fine artists, but mainly they are attracted to the area of commercial art, advertising and design.

Keeping the wealth in the family is important, so the fertility in this section will probably go into spawning as many heirs as they can to the family fortune. Otherwise, the more altruistic Dove types will set up trusts and charities, passing on their legacy that way. The ‘fortune’ they pass on could also be information and wisdom, like a library.

The tarot card associated with this decan is the ten of swords. As I stated in the previous decan, unfortunately, the air signs are stuck with the swords suit as representing them so the imagery is not going to be so positive.

We must remember that these cards must be read slightly differently when associated with the decans as they will show the lessons learned in other lifetimes and karma that may have already been paid back. With the 10 we have come to the end of a cycle, so it is likely that these souls are very old indeed.

This card is the end of the line and the darkest hour before dawn, which goes very well with its Saturn rulership. Karmically this life is is about releasing. “Peace is on the way and an end to suffering. However, you cannot just lie there and expect it all to be done for you and to you.

Recovery depends on your letting go of and saying goodbye to the way you have been living and coping with things. Change is needed on every level for you, as what you have been doing up until now has not been working. “ ~ Teachmetarot. This is the area of the super-media gods, their lives are always dramatic, living on the threshold between life and death.

Bellatrix 20º is the female counterpoint to her butch neighbour Betelgeuse on Orion’s opposite shoulder. Both give great military honour, which in modern terms means success in business. Bellatrix is the dare-devil amazon, the warrior queen. With the charioteer also here in this decan, it is easy to picture Boudicca. Bellatrix “gives great civil or military honor but danger of sudden dishonor, renown, wealth, eminent friends and liability to accidents causing blindness and ruin. If prominent in a woman’s map it makes her loquacious and shrewish, and gives a high-pitched, hard and sharp voice.”

The Sun here is certainly vacillating! The reason though could be because of the native’s insatiable curiosity. They also say curiosity killed the cat which in practice means these folks find themselves scuttling away from many a scrap. The rich selection of stars found in this decan mean that many different fates are open to them, the problem is settling for just one.

Gemini is good at juggling many options  and will keep people guessing until the very last minute as to their final choice. In a way, this ability to change roles and moods swiftly means that they are able to slip out of impending disaster just in the nick of time.

Yes, this cat has nine lives also, which is just as well. Since the Sun rules this decan (according to the Chaldean system) it is actually really strong here in leadership, sometimes too strong, which means it will make enemies.

The native has the gift of the Gemini gab and can be your classic used-car salesman depending on which of the stars are the closest. Some of these folks are far from charming and attract a love or hate following. Gemini Sun 3 generates a great deal of optimism and they have a youthful vigour that lasts well into old age. The more surly among them can get very cantankerous in later life though, so it helps if they have a ‘good twin’ partner to smooth out their rough edges.

In the arts, Gemini Sun 3’s experimental brand of creativity produces innovative designs. Their products tend to be more striking, rather than classically harmonious. This is because they like to mix together colours, flavours or even people that shouldn’t really match, just to see if they can! This approach is brilliant, bordering on genius when it does work, but horrendous when it doesn’t, hence the very mixed fate of this decan in terms of its success. 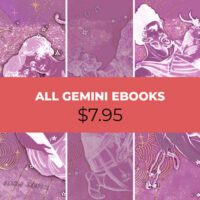 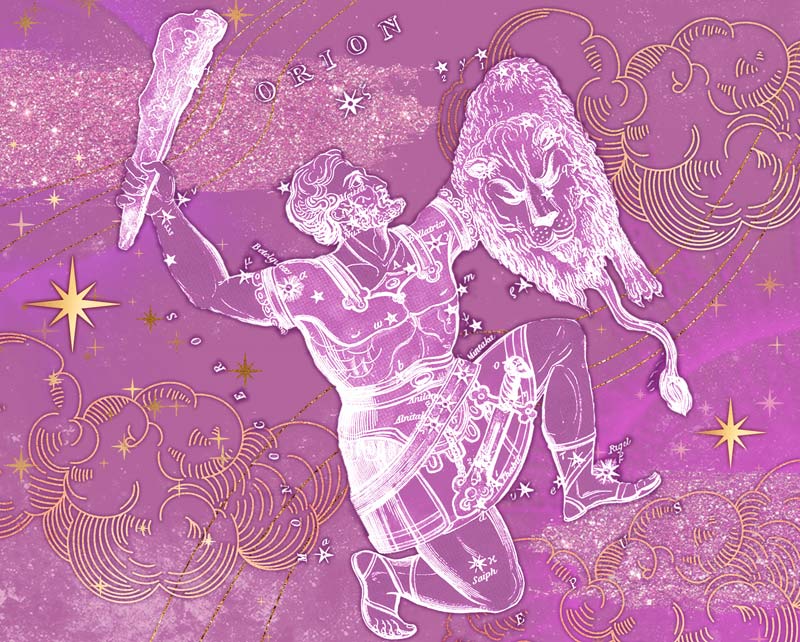 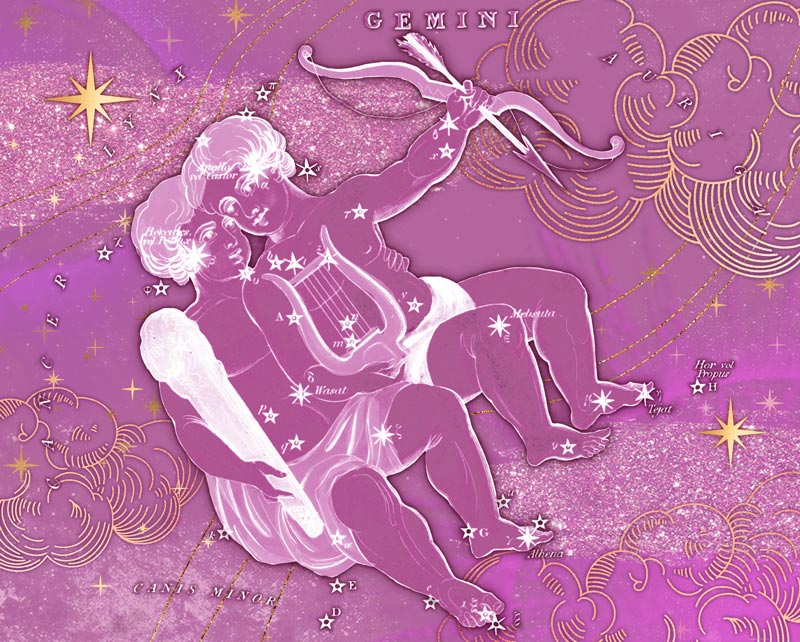