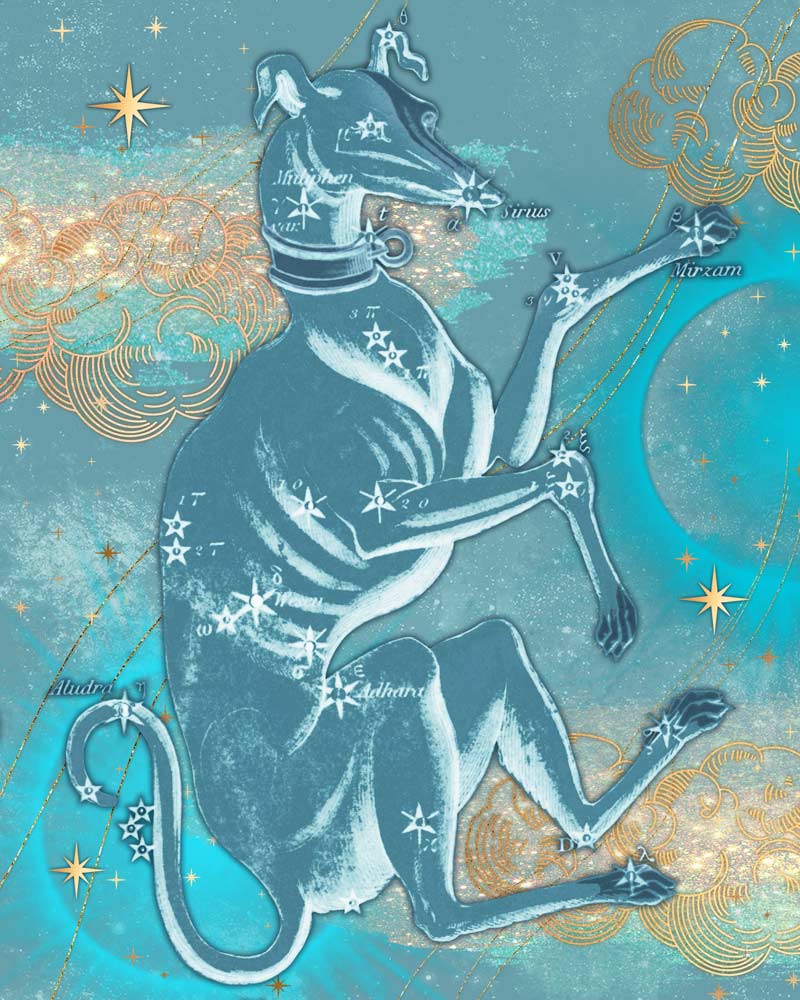 These folk’s super-success may come from a deep feeling of being unworthy or tarnished in some way. Nevertheless, these people are bright sparks and because of that, they attract a lot of envy. Often Cancer decan 2 don’t understand themselves why people are so jealous of them, when in fact they themselves are feeling envious of others .

Cancer decan 2 can be the true moody, crabby crabs. When Sirius heats up, it’s a searing white heat causing a very premenstrual type temper that comes like a bolt from the blue. In ancient times Sirius was associated with feverish temperatures, which brought pestilence. The star was actually not regarded as a good omen at all.

At the same time, Sirius was Orion’s trusted hunting dog. For the Egyptians, Orion is Osirus, and Sirius is Isis his beloved wife. This Goddess totally fits with the side of Cancer that we know as the devoted, nurturing moon. Isis association with Cancer decan 2 gives the ability to resurrect and ability to breath life into the dead.

Cancer decan 2 is the fixed (Scorpio) segment within the cardinal so it has the combination of passionate beginnings and the intensity of the established season. This bursting into bloom under the steady burn of the Summer Sun is known as the ‘Dog Days’.

Hysteria comes from the Latin word for the womb, which is ruled by Cancer. Much of the heebie-jeebies towards Cancer decan 2 comes from the fear of the hidden, the dark and the subconscious. Fairytales are very Cancerian, how many of them feature the Moon, big bad wolves, evil step-mothers, unicorns and twins? Mercury as the co-ruler of this decan brings in the connection with children.

These folk can live in an eternal childhood where everything is magical and surreal, this certainly shows up in some of the artists and musicians here. Some of them remain charmingly young-at-heart until old age, retaining the bounce and velvety soft veneer of a puppy. Negatively they can remain stubbornly childish, refuse to grow up and expect the world to take care of them till they drop.

Cancer decan 2’s lunatic side though is where great innovation happens. Cancer is associated with nostalgia and the past, so if Cancer decan 2 should be inspired by times gone by, it is presented or updated in a radically new way.

It will seem totally fresh even if it’s 2000 years old. Cancer does need to recognise when it is fully spent whether creating or caring. If these lunar types don’t honor their moods, they can really lash out.

Cancer decan 2 simply cannot give, give, give 24/7 without some serious, Sirius burnout. Then the fire-breathing dog that the ancients warned about surfaces. This happens when the native has not given themselves enough time to become hermit crab for a few days each month. Cancer decan 2 burns brightly and brings fame, which can bring unwanted attention. For this reason, they must trust their instincts and retreat into their shell when they have had enough of the spotlight.

The tarot card associated with this decan is the three of cups. This is a celebratory life and suggests good karma earned much as the trine aspect is. “The Multiple Choice of Feast or Famine aspect of this card could find you moving from a period of drought in your love-life to having several potential partners to choose from all at the one time.

If there has been a separation or falling out between partners the Three of Cups can symbolise a happy reunion.” ~ Teachmetarot. The joy of brightest star Sirius shines through here. It could also mean that this life you will have multiple marriages or many children. It could also signify a life spent socializing and organizing parties. 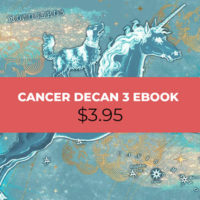 Austin Coppock calls this decan ‘the walled garden’ and says these people really need the right environment to thrive. “The natives cultivate their life carefully, nurturing their relationships and career toward maturity” But that they are ‘hot house flowers’ and therefore “there is a vulnerability…, and thus a fearfulness … when they are forced out of their comfort zone” [6] As blazing and cardinal as this decan is then, the Sun Cancer 2 is surprisingly vulnerable.

However, there are enough formidable characters below, plus the super-power that is the USA. But it is true that this energy really doesn’t like to get out of what it is familiar with, and familiar IS the word. They feel safest within their family group and if they are not close to their blood relatives they will stick close to others they consider to be their tribe. Staying loyal to their clique is also important as that way they can keep their precious protection!

We can see how the crab’s shell is very much that protective shield. Canopus shows the dark side of the decan and one where domestic life is far from blissful. This can be because these folk find it so hard to leave their family group, even if they are abusive.