The Moon is peregrine in Aquarius and feels quite isolated in the domicile of Saturn. Because of this, lessons learnt at this time will force us to grow up very quickly. This is a good position for the mind and imagination since Mercury rules this decan, but we might find it very difficult to listen to our body. We may distrust our gut feelings and rationalise every problem that comes to us.

This can lead to health problems if we ignore our bodies’ aches and pains. We might fee we should be on stoically pushing through the pain body in order to look after others who appear more ‘needy’.We could play the martyr in relationships and unconsciously pick partners with addiction problems.

However this is an excellent moon to express our feelings through art and poetry since talking them through is difficult. Austin Coppock calls Aquarius decan 2 ‘Heaven & Earth’ because it is about bridging the gap between them.

This means that at this new moon we can sometimes feel in a state of limbo. “The natives strive to be emotionally independent but may suffer from a lack of support and feeling of alienation…. Many have a detached, philosophical disposition” he also agrees that “The lunar position supports the mind, but often at the cost of the body” [1]

With Moon square Uranus in the sky, the collective is restless and revolutionary. There could even be an event which leaves the public stunned, like for example Princess Diana’s fatal car crash.

Shocking and sudden accidents can occur. Uranus is a sky god so unusual incidents involving UFOs are possible. The skies could reveal unexpected omens or just look more awe-inspiring than usual with bright unreal colours. The energy is volatile but can also lend itself to great innovation too.

In the new moon February chart, Uranus is also trine Venus which can help sooth the jolt from Uranus. the rest of the chart is mostly harmonious with trines and a sextile. So although there is edginess to this new moon, it looks like we will find safety and comfort from loved ones. Venus trine Uranus brings unique relationships and unexpected alliances. Looks like those who feel isolated from the mainstream (Very common with Moon square Uranus types) will find their tribe!

Almandine Garnet’s healing energy cultivates a sense of security, safety and abundance. [2] It helps in bereavement. It is supportive in taking time for oneself, bringing deep love, and aids in integrating truth with self. It opens the higher mind and initiates charity and compassion. [3][4]

Almandine Garnet can help arouse the energies of the kundalini, the profound spiritual power said to lie at the base of the spine. Once stimulated, those energies are kept more grounded by Almandine’s steady, slow vibrations. [6]

It is a stone of physical love and the relationship between loving partners, supporting each other’s needs and desires. [6]  As a strengthener crystal, Almandine Garnet increases the powers of resistance. It aids insight and helps achieve one’s ideas and goals. [5]

Almandine is a stone of psychic protection. Its relatively dense energies keep one strongly connected to the body, and it is more difficult for negative energies or entities to attach themselves. [6] It can assist in accessing past-life memories from ancient civilizations and in clearing karmic patterns. [6] Almandine protects against emotional vampires, manipulators and evil spirits. Anyone engaged in spirit rescue should wear it. [1]

Armus 12º in the heart of the goat is “Of the nature of Mars and Mercury. It gives disagreeableness, contemptibleness, instability, shamelessness, nagging and a troublesome and contentious nature.” I prefer to think that the “nagging” could manifest as tough love and constructive criticism. Positively this star can motivate people to better themselves, but those who like an easy life may perceive this “motivation” negatively. Armus must resist the temptation to treat their partners like a psychology project.

The tarot card associated with this decan is the six of swords which is about moving on and finding a safe harbour. Karmically this suggests that you are moving away from more turbulent lifetimes to one that is more stable. There is also a feeling of being protected “The Figure steering the boat in the Six of Swords is often symbolic of a Spirit Guide or Guardian Angel who stays close to you during times of trouble, comforting and guiding you through dark times.” ~ teachmetarot. 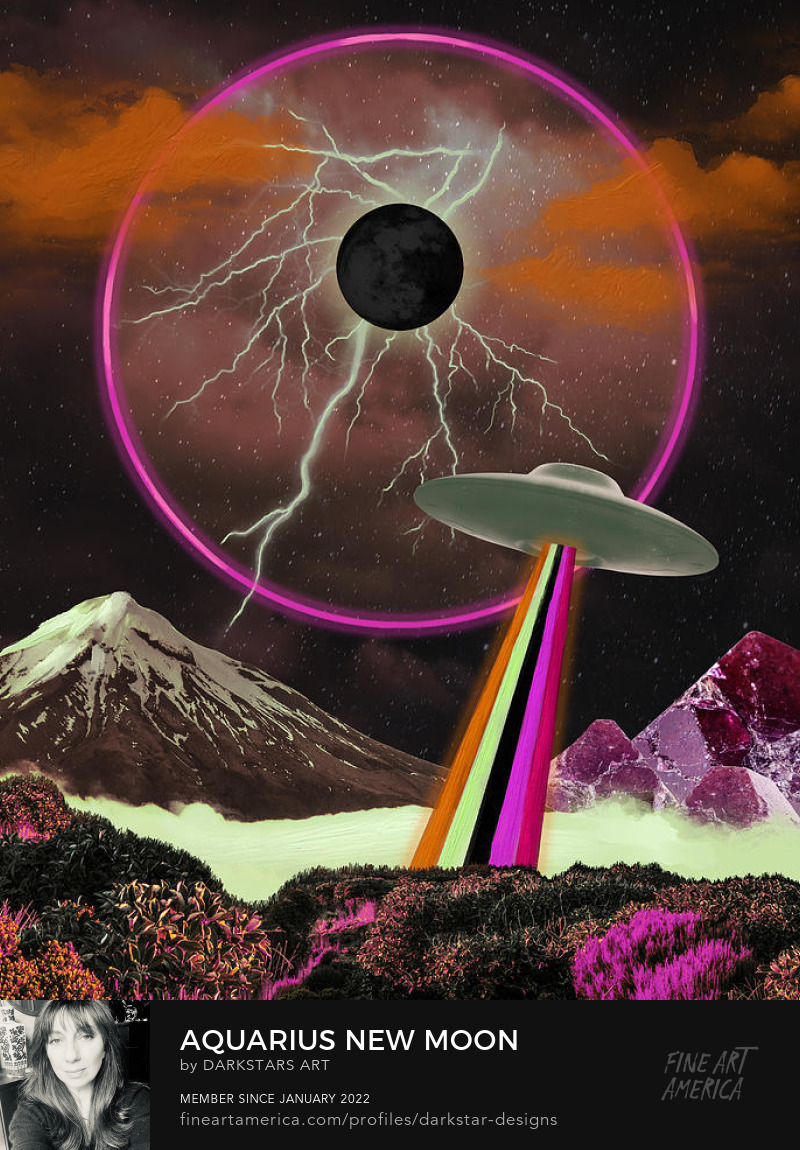 this artwork ON FINE ART AMERICA from $18 USD

This New Moon will make us feel like we are in between worlds, not belonging anywhere with the ‘heaven and earth’ theme from the decan. Relationships will help us through so it is essential that we don’t atomise ourselves!

Moon in Aquarius decan 2 is prone to withdraw from socialising when they feel hurt and vulnerable. Armus the nagging star can make them behave in judgemental ways that further isolate them from potential intimate relationships.

If you are touched by this new moon, grab hold of your Almandine crystal and reach out to people with whom your resonate. You will be pleasantly surprised by the warmth of the reception. Uranus is also a planet connected to the kundalini, and awakenings in general.

So at this Aquarian new moon you may feel a surge of electricity building within, and it wants to go somewhere. Venus is direct now so there is no excuse, get dating, make connections and come out of your hermit life!