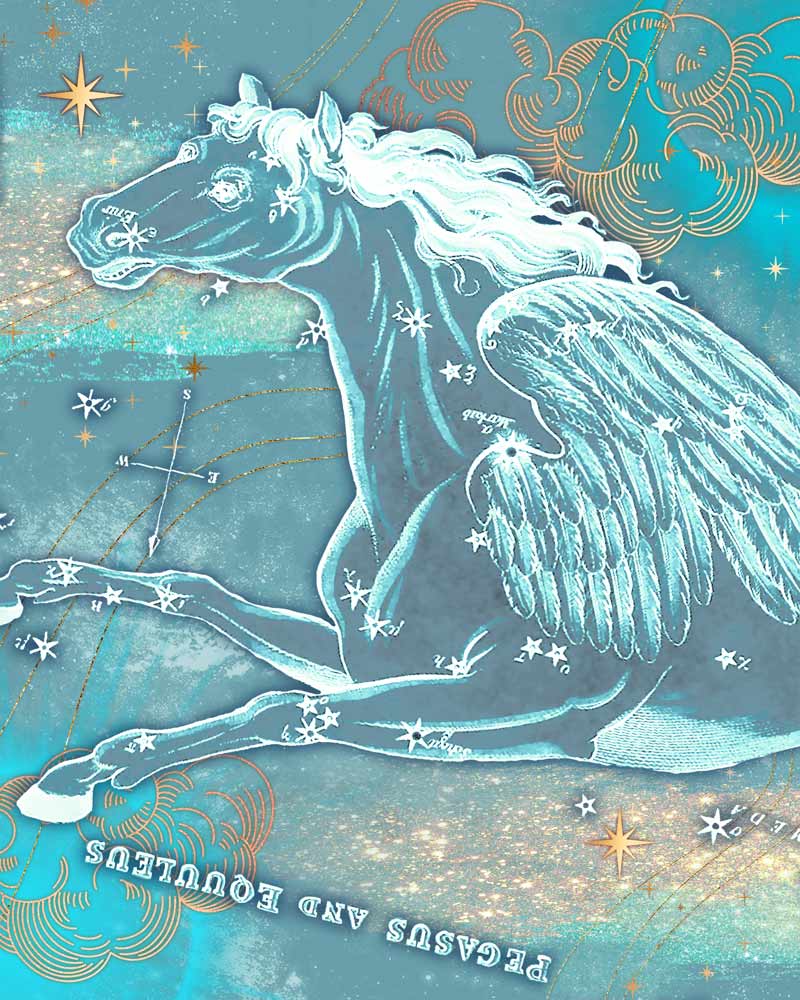 Pisces Decan 3 is ruled by Mars (Scorpio triplicity) in both systems. This is the zone of the impossible, for here we have aeronautical fishes! The sun flies through this decan from March 11 – 20. This zone is totally dominated by the visionary, high-flying, mythical horse Pegasus, after that there is a lizard, a swan and a star measurer.

We get the feeling that this Piscean water is simmering, about to boil over as it makes its way to the new life born on the spring equinox at 0º Aries. This zone is bursting with anticipation for the future and impatient because these subjects have been cocooned for so long. Pisces decan 3 can make calamitous mistakes by overreaching themselves.

These eager foals need to remember that half-baked ideas do not go down well, so must learn to hold back until their plans are fully developed. The latter end of the decan, especially those on the anaretic 29º are natural daredevils and aim high in all things.

They are prone to accidents due to their impulsive natures, but very ‘Gung ho’ so will back in the saddle as soon as they can. They have the ability to put a positive spin on things, which can come in useful working in glamour industries such as fashion, film and advertising.

In Vedic astrology, the 24th nakshatra where this star resides is called ‘The Former beautiful’, so Pisces decan 3 at least like to preen themselves and keep up appearances if they aren’t making things beautiful in art or design. However much as these natives have a great sense of the aesthetic, they pride themselves on being primarily intellectuals. In fact, their busy minds might be the reason they are so accident-prone.

Practical things, like simple walking in a straight line, might be a problem…These fishes are often confused as to why they are such hotheads when the usual descriptions of Pisces are so laid back and languid. This really isn’t the case with decan 3!

They retain some of the wonderful Piscean imagination, mysticism, musical talent and psychic ability, but they are more likely to put these talents to use because of their great desire to see their name in starry lights. They are ambitious visionaries, and will not stop until they see their dreams materialize.

The biggest problem with these natives is over-reaching themselves and the danger of burning themselves out. Pisces decan 3 are naturally fascinated by the cosmos, meta-physics and what makes the universe tick. They can also simply be very enamoured by stardom.

Some just crave fame for fame’s sake, because they desperately want to be somebody. Those who don’t have the necessary talent become eternal Cinderella’s. They remain stubbornly convinced that a handsome prince will whisk them away from their drudgery and put them on the throne they deserve.

Everyday Is A Fairytale

Pisces decan 3’s colourful imagination sees the fairytale in everyday life even if things are quite bleak. These natives are always craning their neck above the prison bars of reality, smiling at their rainbow future that will surely come. Yes, it’s totally real to them, and some with very strong powers of visualisation can indeed make it happen, somehow, somewhere… This tendency to live in a naive bubble can even protect them from the bruises of modern life.

Pisces decan 3 can go through great trauma, ball their eyes and look like a shredded mess. Frightening though it might all look, be reassured that, like the lizard that resides here, these folk can magically regenerate their limbs in a thrice.

So, although Pisces decan 3 may have accidents, even life-threatening ones, they can bounce back pretty quickly. These people are the legendary comeback kings and queens.

Thankfully some of the stars in Pegasus give ‘honour, riches and fortune’ [1], so they can easily pay the bill for repairing any mangled fetlocks as a result of their dare-devil activities.

The tarot card associated with this card is the ten of cups. The Cinderella effect of the meaning of the decan as a whole is very marked with this card since “It suggests emotional fulfillment, settling down and starting a family. You have found the love you have searched for… You may have a picture painted in your head of the ideal partner and life for you.  There is absolutely nothing wrong with this as we all have our own idea of what we are looking for, and a dream we would dearly love to come true.”

Painting a picture is appropriate as this is such an imaginative decan. Karmically for artists “The Ten of Cups suggests exceptional work.  Your creations will be truly inspiring and might even be your best yet” Like high flying Pegasus, in this life “It is all taking off for you now and you may even get some global recognition.” ~ Teachmetarot. Beta Phoenix 20º is useful to have here since it gives the ability to resurrect oneself from out of the flames. As you will see, Pegasus has a huge influence on this decan so because of this, accidents go with the territory. I would say early in the decan these ‘accidents’ are less dramatic and mainly simple domestic blunders.

It is rather like having an unwieldy horse in a tiny kitchen, prone to twisting its fetlocks on the slippery vinyl floor and banging its forelock on the kitchen cupboards. Robson says the constellation “ is said to give a pioneering disposition, ambition and power, together with a long life and lasting fame.” [3]

Markab 23º ~ “Energetic, unlucky, impermanent martial honours, disappointed ambitions, accidents, sickness.” [1] A person who is consistent in their beliefs, an unchanging person; to be seen stubborn or strong-willed.” [6]
Scheat  29º ~“Danger through water and engines, liable to accidents or drowning.” [4]” Headstrong; an independent thinker. Pursuing one’s ideas or one’s version of truth without regard to the opinions of others” [7]

The Sun is on a rollercoaster in this decan, since it is waving goodbye to the last solar year and about to leap into the springtime with renewed vigor. Sorry for the northern hemisphere bias, but even the fixed stars here describe the drama of this hinge-point of the calendar.

Up or down it doesn’t really matter, the point is, this decan is on the tipping point one way or another. It is very appropriate that the discovery of Uranus is here since the planet marks the threshold to the world of the non-visible planets.

From Uranus onwards, we deal with alien matter and dimensions we cannot see. Sun Pisces 3 is fascinated with mystery and what lurks beyond the physical. It feels like it must “boldly go” like in the famous Star Trek series. This is quite an unworldly placement for those who have to live a material existence so they may find it hard not to escape into Sci-Fi and hyper-dimensional realities. There is a feeling of breakthrough; the invention of the telephone allows a person from one side of the world to break through dimensions in time to speak to another on the opposite side.

There are sharp contrasts in the behaviour of these individuals too, for like the rollercoaster they plunge into misery one day but are upbeat and ecstatic the next. The fixed stars warn of the negatives from the subject’s rash and impulsive nature. However, I feel that if Pisces decan 3 learns patience and works on bridling their wayward passions they can avoid the dire warnings of any really serious accidents.

MARKAB 23º ~ “Trouble and loss through legal matters, danger of judicial sentence of banishment and exile” [1] “The teacher philosopher, in sports or in a spiritual discipline. One’s small actions become the basis for much larger projects. The wise person. The need for consistency in the Law.” [6] SCHEAT 29º ~ “Many voyages, losses through law, friends and relatives, danger of imprisonment” [4]” The theologian or sports person who is teaching moral code. To value education and all its institutions. A period where religious leaders speak out” [7]

We come to the end of the zodiac journey with Jupiter having resurrected, yes? Possibly. With Mars ruling this decan, there is a certain martyrdom vibe here. Decan 3 is also the zone of the impossible dominated by the mythical flying horse Pegasus.

This decan is naturally edgy because it is at the end of the zodiac, and Jupiter here will only exaggerate that. I like the fact here that “religious leaders speak out”. Some modern-day Joan of Arcs are needed in these times. The judgemental side of Jupiter takes full power here. Like with Pisces decan 1, there are a good few astrologers in this section too.